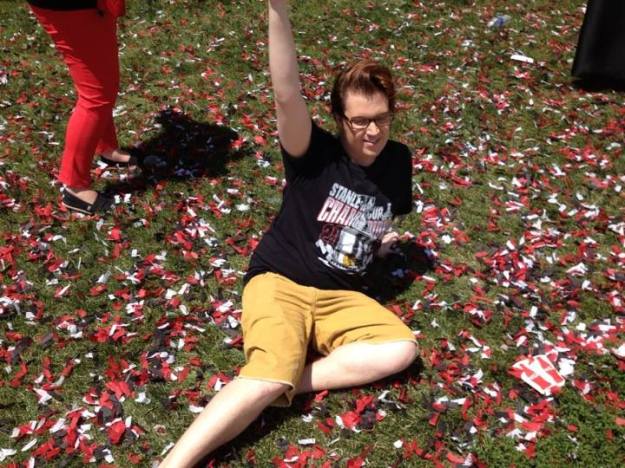 So you’re probably wondering where I’ve been. That’s understandable. Ever since last winter, this blog has experienced a silence so deafening even Madame Kovarian would squirm.

Well, I’ve been busy. I started a new day job which, though still in mortgages, offers me less stress and more flexibility than ever did my last. I’ve been to Ohio, Kentucky, and Tennessee to see family, friends, and even a couple enemies. I got a free jeep. I’ve lost 15 pounds. I’ve planned a trip to London, and will be spending Thanksgiving in Britain, the irony of which is not lost on me. Indeed, it’s irony which compelled me to choose that date.

But perhaps the biggest change in my life has been that the Columnist, a wonderful up-and-coming site I had the privilege of contributing to, has shut down. I’ve spent the last few weeks regrouping. I wasn’t the most active contributor, but it was through the Columnist that I’ve seen some of my biggest successes to date.

Okay, those pieces were actually my only successes to date. Since we last spoke I’ve pitched, or attempted to pitch, to sites as varied as PinkNews, CNN, and the Advocate, all of which proved fruitless. I had writers and friends, all of whom I admire, encouraging me along, and attended the National Lesbian and Gay Journalists Association’s conference in August, which was a decent networking event and redoubled my resolve to make this career happen. But it also made me realise that I’ve got much further to go than I thought, not just to get to where I want, but to have the capability of getting there.

When you pitch, and pitch, and pitch, and hear nothing back, not even a rejection, it’s not just incredibly frustrating, but incredibly demoralising. David Bell, Molly McCaffrey, and the WKU Creative Writing department told me as much as a young 21 year old aspiring writer, and they also told me that I’d pitch a thousand times before anything came of it. But what they couldn’t prepare me-or any aspiring writer-for is actually coping with the rejection and dejection. It fucking sucks. Every time I pitched to a magazine or website, only to see another piece over the same topic published a week later, I questioned my own ability, my own talent, and my own voice.

Maybe it was time to give up the ghost.

It was with that in mind that I returned home a couple weeks ago. One of my close friends from university was getting married, and her wedding became something of a sorority-plus-Skylar reunion. Seeing her so deeply in love, as well as seeing a couple other old friends with their loving spouses, content in their lives, made me long for whatever it was they had. It’s no secret that I’ve got some fucked up Disney fantasies, where Prince Charming sweeps me off my feet and we live happily ever after in Chelmsford or Chiswick or Croydon, playing out a queer version of Keeping Up Appearances, with me starring as a sort of Guyacinth Bucket. We’d adopt a couple kids, or have a couple on the NHS, whichever was simpler and cheaper and pissed off Roger Helmer more, and he’d work in the City by day as I baked pies and organised fêtes for little Gareth’s primary school.

Of course that would involve me actually finding a British man, which probably requires me being in Britain, which I’m not. I’m in Chicago. But I could easily adapt that fantasy to meet North American specifications. Instead of Chelmsford or Chiswick or Croydon, it could be Wilmette, Winnetka, or Warrenville. Instead of little Gareth, we could have little Gavin, and instead of playing proper football, he could play American football. (No. I have to draw a line somewhere.) Life could be just as idyllic, if not as ideal.

The point is, I could start living for today, instead of dreaming for tomorrow. I could begin living in Chicago, instead of existing in Chicago. So for about a week after coming home, I embraced all things American. I ate a lot of pumpkin shit, cos I’m white and it’s fall. I listened to a lot of country music, cos I’m white and it’s fall. I started driving my jeep to work, cos, well, you get the picture.

I didn’t write. I didn’t tweet. I actually skipped an episode of Question Time, and only felt slightly guilty. It was liberating. Maybe I could be okay with this. Maybe I could be an assistant for the rest of my life, working in this office with good people. Maybe I’d meet a nice Chicago boy and settle down on some Midwestern Wisteria Lane, and live out an all-American existence. Maybe contentment was all I could, and even should, hope for.

It felt good, not living under the constant pressure to produce, to write, to pitch, to be published.

It felt good to not constantly be thinking about life in London, but living life in Chicago.

It also felt disconcerting. My entire adult life has been dedicated to moving to Britain, and the past year has been dedicated to being a writer. Giving that up felt like, in some way, giving up a big part of my identity. I’m that Anglophile kid who, in the words of my best friends, “loves England and will tell you about it.” I’ve made Britain part of my character, and while giving that up temporarily was relieving, it didn’t feel right. It didn’t feel authentic.

That’s been a massive part of the problem over the past year. I haven’t felt authentic. The stiff analyses I’ve tried offering on the Columnist and on my Twitter feed have been cogent, if not always fresh, but they’ve also been stuffy, and to some degree derivative. They’ve been stiff, formal, and a bit pompous, all of which I’m not.

I want writing to be fun again. I can say that because it’s not my job. Writing doesn’t pay my bills. Maybe one day it will, but right now it doesn’t. It shouldn’t bring me more stress, it should be a way to de-stress.

So that’s where I am, and that’s how I’m treating it. I’m not going to beat myself up, or let others beat me up, over writing anymore. I’m going to have fun. I’m going to be me. I’m going to say shit that pisses people off and give zero fucks while I do it. I’m going to blog, and not pitch, and if people want to read this little site, fine. If they don’t, whelp, I’ve always got mortgages.

I’m going to keep looking at ways to move to the UK. I’m going to keep thinking about graduate school. But I’m also going to live life in Chicago. I’m going to eat deep dish pizza. I’m going to cheer for the Blackhawks (though not their racist mascot). I’m going to start dating again, not hold off for the perfect British man. He may not exist. Or he may be living in Lincoln Park. Who the fuck knows?

I’m coming back. Watch this space.