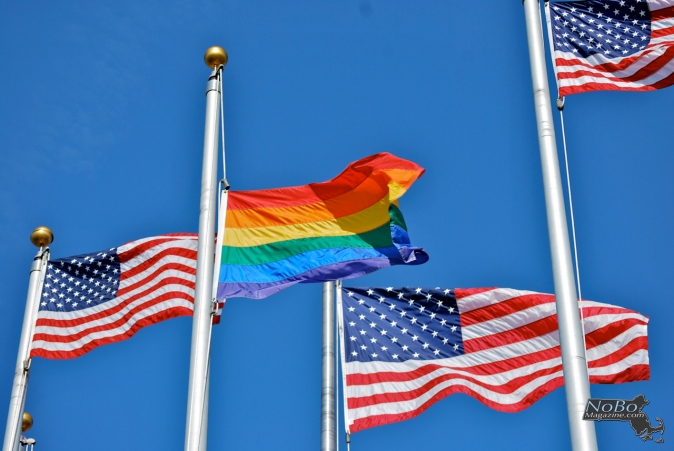 Just over a decade ago, I sat weeping as my home state of Kentucky passed a constitutional amendment banning gay marriage and civil unions in our fair commonwealth. I was 18 years old, a freshman in college, and had worked tirelessly trying to persuade my fellow Kentuckians to vote against discrimination. I went door-to-door in Bowling Green, talking to voters about what it means to be gay. Some were sympathetic, even understanding. Others were forthright in their opposition to equality. Most were polite. A few were hostile.

I knew we were unlikely to win, but at 18, I think you always have hope that somehow things are going to work out in your favour. That, you know, it can’t possibly be as bad as you think. But it was. 75% of Kentuckians voted to amend the state constitution to bar gay marriage. We were one of many states to do so that year.

As the night crept on, it became clear that not only would the amendment pass, but that President Bush would be re-elected on a platform that was decidedly anti-equality, swept back into the White House by a tide of homophobia he himself had instigated.

I was at my friend Jonathan’s house. We’d recently stopped seeing one another romantically, but it still felt right to be together. He was the gay person I was closest with, and on that night, I desperately wanted another gay person with me. We cried in one another’s arms, taking shots of vodka or gin or whatever was in the house, really. Drinking numbed the pain. Cuddling cured the sense of rejection. America might hate us, but at least we had each other.

A couple days later, I had a conversation with my friend and fellow activist Kelli Persons. “It won’t be our generation that wins marriage,” she told me sombrely. “We may see it in our lifetimes, but it’ll be our grandkids who get it done.”

I agreed. It was a stark juxtaposition to the jubilation I felt when the Massachussets Supreme Judical Court ruled in favour of equality the year before. In November 2003 I was a senior at Leslie County High School, deep in the East Kentucky coal fields. My life was a daily crucible of homophobia, with slurs so violent I still find it hard to believe I made it out unscathed. As a teenager whose only exposure to gay people had been Jack McPhee on Dawson’s Creek, the Massachussets ruling was a complete shock. I had no idea that there was a place in my own country where I was actually viewed as equal before the law.

I decided I had to move there. I applied to colleges there. I got accepted to one.

But fate had different plans, and I ended up at WKU, where on election night 2004, I felt the full weight of bigotry and oppression land upon me like a giant homophobic anvil.

I spent the remainder of my college career fighting for LGBT equality. When the university closed the Outlet, our LGBT resource centre, I pressured the university to reopen and rehouse it, a fight I’m still waging as an alumnus. I became the president of our gay/straight alliance. I helped form a statewide network of LGBT students pushing for fairness in our schools. I spoke at a rally when one of those students was expelled from his university for being gay. I became a vocal supporter of domestic partner benefits for university employees. I cried when, in 2010, that came to pass.

Never did I fathom that five short years a Supreme Court decision would render that whole fight irrelevant. I could only dream as big as health insurance. Never did I imagine our relationships would be granted true equality in this country. Not so soon. Not before I turned 30.

Yet here we are. Something I’ve dreamt of, worked towards, and fought for since I was a teenager is finally a reality. And it feels fucking great. True, I’m not getting married. I’m not engaged. Hell, I’m not even seeing anyone. My most committed relationship is with bourbon. But that doesn’t matter.

You see, this day means something to every gay, lesbian, and bisexual American, regardless of whether or not they’re rushing to the alter. Today, the Supreme Court of the United States of America affirmed to the masses what I have known all along—that I am equal. They didn’t give us the right to marry; they acknowledged that it’s been there from the beginning. I already knew that. Today they pointed it out to the rest of you.

The first time you feel as though you are finally an equal citizen of these United States is a feeling I can’t really describe to anyone who isn’t also experiencing (or hasn’t in the past experienced) such euphoria. There are no words. But there are actions, which may illustrate what it’s like. Here are just a few things I’ve done today:

There is still work to be done, I know. We can still be fired for being ourselves in 29 states. My trans siblings, especially my trans siblings of colour, are being murdered in our streets. Kids are still being sent to conversion therapy. “Faggot,” “dyke,” and “gay” are still deployed as insults in high schools throughout the country. And somewhere, right now, while I’m typing this and celebrating, an LGBT child is begging for food or sleeping on the streets. We’ve got a long way to go.

But for today, for just one glorious day, I am focusing on the fact that for once we’ve gotten it right. For once, this country has acknowledged that all men and women, even gay men and women, are created equal. That for once my dignity as not only an American, but a person, has been federally and officially and finally recognised.