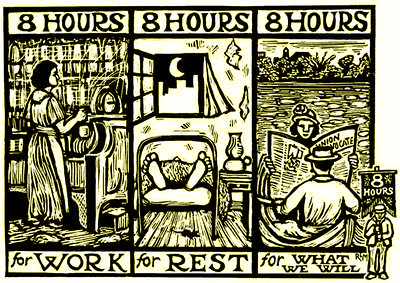 Picture it: Chicago, 1886. The soot, excrement, and brackish waves of Lake Michigan mingle as you walk through the smoky steel canyon that is the city’s industrial corridor. For months, you’ve been locked out of your job at the McCormick Harvesting Machine Company factory, fighting for an eight-hour workday and better wages; you make $9 a week working 12 hour days.

You walk down Western Ave towards Blue Island. There August Spies, a local anarchist newspaperman and activist, encourages you to “hold together, stand by [your] union” if you hope to succeed. The strike, ongoing since February, has been largely peaceful, despite some heated altercations between your striking comrades and strikebreakers working the factories. The shrill bell tolls, its brassy ring indicating another workday over. You feel those behind you pushing forward, shouting angrily at the workers leaving their shifts. “Class traitors!”

You manage to step away from the shoving crowds, your boots sinking in the mud and muck. As you’re reconstituting yourself, rubbernecking to get a better look at what’s happening near the factory gates, you hear a bang. Then another. Screams of horror and anger fill the air as the police move in. Two of your coworkers have just been killed, gunned down by the police.

The next day, you make your way to the Haymarket, a square in the city’s central business district well known to the labour movement. A light rain dampens your clothes, but not your spirits. There, Spies and others give rousing speeches about the need for solidarity and action. Mayor Carter Harrison stops by, tips his hat at you, and heads home, noting nothing unusual.

The final speaker, a British socialist, is finishing his short speech when the police arrive, ordering the crowd to disperse. A loud boom. Screaming. Gunfire. More screaming. You cover your eyes, coughing as you choke on the toxic cloud produced by the bomb. When order is finally restored, eleven people—11 cops and four workers—are dead.

The following days and weeks see protests by organised labour in New York City, Boston, London, Paris, Berlin, and throughout the world. 1 May becomes International Workers’ Day, except in America, where its associations with socialism and anarchy prompt campaigners to move the celebration to the first Monday in September.

This was the Haymarket Affair. In the ensuing trial and conviction, now widely condemned as a sham, would see four men, including Spies, executed. Though they may have died, the movement lived on. Labour historians consider the Haymarket Affair the genesis of the modern workers’ movement.

Today is Labor Day in the United States, a day traditionally seen as the last day of summer and featuring barbecues and picnics. Many people will go through today blissfully unaware of the struggles of our ancestors, who fought to ensure we had a fair shake and loud voice in our workplaces and in the market. Many of the perks modern workers have come take for granted—an eight-hour workday, overtime pay, vacation or holiday time, sick leave, maternity and paternity leave—are the result of decades worth of struggles and fights by labour activists, socialists, feminists, and others. We stand on the shoulders of giants.

Yet the work is not over. Yesterday, The Independent reported on the British government’s plan to crack down on union organising and demonstrating. Liberty, Amnesty UK, and the British Institute of Human Rights have accused the government of “seeking to undermine the rights of all working people” in their plan to require striking workers to identify themselves to police and receive authorisation form the authorities before taking any industrial action. Considering anonymity in striking is what helps protect workers’ jobs and alleviate concerns of retribution, the proposed changes to trade union laws are a galling attack on the gains our foremothers and forefathers fought so hard to achieve.

In America, Yahoo! CEO Marissa Mayer has sparked a national conversation about maternity and paternity leave after refusing to take all she is entitled to under a company policy she herself implemented. American ranks at the bottom of the Western world for paid parental leave—as in we’re the only Western country that doesn’t require it.

The United States is also the only Western nation that doesn’t require employers to offer paid vacation. When they do offer it, many Americans won’t take the time, for fear of losing their jobs or being overlooked for a promotion or wage. Vacations are good for workers and companies, resulting in a recharged and reenergized workforce. Yet nearly 1-in-four Americans get no paid time off.

You’d think with all these extra hours, American incomes would be at an all-time high. Quite the opposite: Americans work longer hours and retire later than any of their Western counterparts, and for a much smaller share of the profits of their labour. In 2011, Mother Jones pointed this out in a biting indictment of an article. It was updated only a few days ago to show its relevancy remains. Though the authors tackle a number of topics, from speedups to offshoring, the most glaring fact is in just how much wealth we’ve redistributed to the top:

For 90 percent of American workers, incomes have stagnated or fallen for the past three decades, while they’ve ballooned at the top, and exploded at the very tippy-top: by 2009, the wealthiest 0.1 percent were making 6.4 times as much as they did in 1980 (adjusted for inflation). And just to further fuel your outrage, that 22 percent increase in profits? Most of it accrued to a single industry: finance.

Despite not reaping the fruits of their labour, GOP presidential hopeful Jeb Bush thinks we should work even longer. The average American in full-time employment is working 47 hours per week, reversing the historic victories the labour movement fought so hard to win, yet they are hardly seeing any of the reward.

We haven’t seen mass industrial actions in the United States like we’ve seen in the United Kingdom, where workers on the London Underground have walked out over the introduction of overnight train services. They fear this will result in longer hours for the same amount of pay, taking away from their hard-won work/life balance. The trade union movement has helped propel left-wing candidate Jeremy Corbyn to frontrunner status in the Labour Party’s leadership contest, despite changes to party policy designed to weaken their influence. And while the government continues to undermine and attack the unions, they remain an integral part of British industry.

Quite the different story here. The Huffington Post reports that union memberships are at historic lows, and lays the widening wealth gap squarely at the feet of anti-union legislation and policies. “Unions, whatever their failings, give workers more leverage to demand higher wages,” they write, pointing out that income inequality has grown as unions have disappeared. Right-to-work laws, a name which sounds good but masks its ugly true intentions, severely limit unions’ ability to collectively organise and negotiate.

Studies cited by Newsweek, which in May had an excellent analysis of how the assault on unions is hurting American workers suggest that since passing a right-to-work law Michigan has lost 48,000 union workers; nationwide, right-to-work has shrank union membership by nearly ten percent. But right-to-work laws aren’t just detrimental to unionised employees. They hurt non-union employees, too:

As unions continue to disappear, Groups like Fight for $15, which advocates raising the minimum wage, are seeing some successes at local and state levels, but they cannot replace the grassroots role local unions played in protecting and gaining workers’ rights. And as American workers continue to work more for less pay, the role of organised labour in this country is only growing in importance.

Picture it: Chicago, 2015. 129 years after the Haymarket incident sparked a global movement, the cradle of organised labour is run by a union-busting mayor who is pals with an outright anti-union governor. Mayor Rahm Emanuel has routinely squared off against the Chicago Teachers Union, which along with the Amalgamated Transit Union locals, the Service Employees International Union, and other labour groups opposed his re-election this past spring.

Other unions, from pipe fitters to hospitality workers, backed the mayor. But with Illinois Governor Bruce Rauner, a Republican billionaire elected last November, backing right-to-work laws and actively declaring war on trade unions in the state, solidarity is more important than ever. One study suggests Illinois could lose 200,000 union jobs if Rauner gets his way, causing the state’s economic output to decrease by $1.5 billion.

Yet Robber barons such as Rauner and Emanuel continue to pursue these disastrous, unfair, classist policies. In Britain, the government continues its assault or organised labour even as the trade unions begin to fight back. Meanwhile Americans work harder and longer for less pay and benefits than their parents or contemporaries elsewhere in the industrialised world. From paid parental leave to the fight for a living wage, American workers continue to be exploited by big businesses making record profits off their backs.

This Labor Day, as we’re barbecuing and day drinking, it’s important to remember the women and men who earned us this day. But it’s even more important to recognise the ways in which corporatists in both this country and abroad are conspiring to undermine and erode workers’ rights.

Nearly 130 years is long enough. Our work has value. It’s time we’re treated like it.