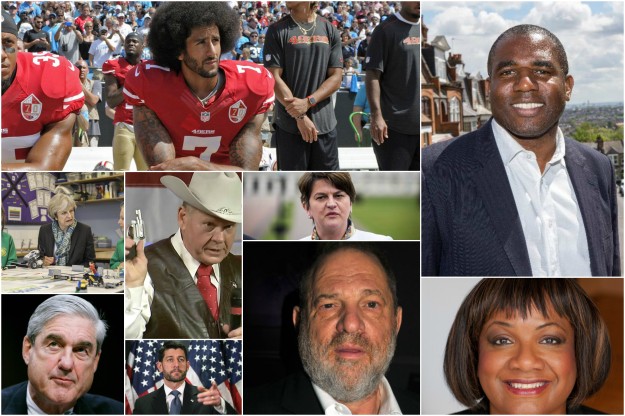 It’s that time of year where we all get drunk, sing hokey songs, and hang our stockings in anticipation of Santa’s visit. I’m already in the festive spirit, wearing my Christmas pyjamas at my favourite microbrewery and drinking a beer whilst petting a very cute dog called Finegan. I can’t tell you whether you’re getting candy or coal this year, but I know I’ve been very good indeed. The same can’t be said for everyone, though. With that, I give you this year’s naughty and nice list!

The Bigot of Belfast had a banner year. The leader of the DUP, along with her nefarious elf Nigel Dodds, secured a billion pound cheque from Number 10 in exchange for propping up Theresa May’s shambolic government. This is after a scandal over an energy deal she made in 2012 which ended up making profits for those enrolled but cost the taxpayers of Northern Ireland £500 million. Her refusal to stand aside during an investigation led to a power-sharing collapse between the DUP and Sinn Fein and created the largest political crisis in the province since the Good Friday Agreement. She’s exacerbated this with her sabotaging a deal between Theresa May and the EU over the Irish border. Never mind her continued opposition to equal marriage in Northern Ireland – she’s royally screwed the UK and looks set to continue to do so into 2018 and beyond.

From capitulating to Trump on the Muslim ban to turning a blind eye to his threats to the media to trying to repeal Obamacare to passing the single biggest transfer of wealth from the working class to the 1% in a generation, Paul Ryan and Mitch McConnell have shown themselves patently unable or unwilling to be a check on the executive branch. They kowtow to Trump at every turn, stymie the Russia investigation, and lead the Republican Party straight into fascism just to line the pockets of their supporters. These ghastly men can hardly be called patriots.

This man (allegedly) molested teenage girls and still came within a breath of winning a seat in the US Senate. That’s how depraved the modern Republican Party is. But Roy Moore was always an odious man. He was twice kicked off the Alabama bench for ignoring rulings from the US Supreme Court. He blamed sodomy for 9/11. He said gays should be executed. He’s human trash, and the people of Alabama finally took out the garbage. Thanks to his reactionary, bigoted, and frankly sexually predatory antics, a deep red state just became a beautiful shade of purple.

Oh Teeza. What a year you’ve had. From cozying up to a proto-fascist (that’d be Trump) and inviting him to meet the Queen (leave her out of this) to that shambolic campaign, your year didn’t start off very well. Then you lost David Cameron’s majority, bought the support of a bunch of homophobes, had cabinet minister after cabinet minister resign – including Priti Patel who took meetings with Israeli officials and didn’t think you mattered enough to tell – and have negotiated exactly nothing when it comes to Brexit. You’re going down in history as one of the worst Prime Ministers and you’ve only been in office for 18 months. Well done, you.

Kaep gave up a lucrative career in the NFL to stand up for what’s right. His subtle act of “taking a knee” for the American national anthem sparked a national protest movement against police brutality and gun violence. He has spoken out on not only this, but the need for community investment in our inner cities, schools, and children. Colin Kaepernick has become the voice for a generation of activists saying “enough” and looking to challenge white supremacy and the extrajudicial killings of Black people wherever they find it. He is an American hero.

I admit it hasn’t been the easiest year for the Shadow Home Secretary, who had a couple rocky interviews during the general election campaign back in the spring. But no one on either side of the Atlantic has been a more effective and louder voice against online harassment, particularly against women of colour, than Diane has. She delivered a brilliant speech in the Commons, a heart-wrenching op-ed in the Guardian, and has highlighted an issue which stifles discourse and threatens to defer thousands of young women, especially, of entering politics. Regardless of whether you’re a Labour supporter or not, or of what you think of Diane’s politics, her contribution cannot be understated.

After Trump sacked former FBI Director James Comey, Robert Mueller stepped in as a special prosecutor into the probe of Russian interference in the 2016 election. Since then, he’s gotten guilty pleas out of two Trump campaign staffers, including Trump’s first National Security Advisor Mike Flynn, and has indicted former Trump campaign chairman Paul Manafort. Whatever nefarious actions the Trump campaign was up to in 2016, Mueller has begun to shed light on them in 2017 and it looks like we’ll hear more from him in 2018. Good, because it’s time to LOCK. HIM. UP.

I’ll never forget watching David Lammy’s emotional interview after the Grenfell Tower fire. He’d lost a friend, rising artist Khadija Saye, in the blaze and has become one of the most vocal champions not only of the victims, but of working class and poor people across the nation who so often live in substandard housing. Since the tragedy at Grenfell, David has never ceased in his efforts to find justice for the victims and to make sure a tragedy like this never happens again by leading the movement for more social housing and stricter safety codes. A rising star, David Lammy has already proven himself a champion of the people and one of the few MPs who seem willing to truly advocate for an end to the endemic housing crisis that has plagued Britain for years.

Perhaps paradoxically, considering the election of Trump in 2016, 2017 has been the year of women in so many ways. Women have led the resistance to the resurgent fascism Trump embodies and espouses from the Women’s March in January to Maxine Waters, Kamala Harris, and Kirsten Gillibrand in Congress. And then Harvey Weinstein happened, and women around the world began speaking out about their own experiences with sexual violence and harassment. Watching the sheer volume of women I know tweet #MeToo has been jarring, humbling, and empowering all at once. Speaking out is courageous, but after Weinstein was exposed a grassroots movement began which cannot be stopped. You have my solidarity and my utter awe, women. The shit you put up with just to exist in this world no male can ever even fathom. I stand with you.

That’s it from me in 2017. I may have one more piece at the HuffPost UK or Independent, but other than that, it’ll be fairly quiet until next year. So I’m wishing you all a very Merry Christmas and a Happy New Year. See you in 2018!