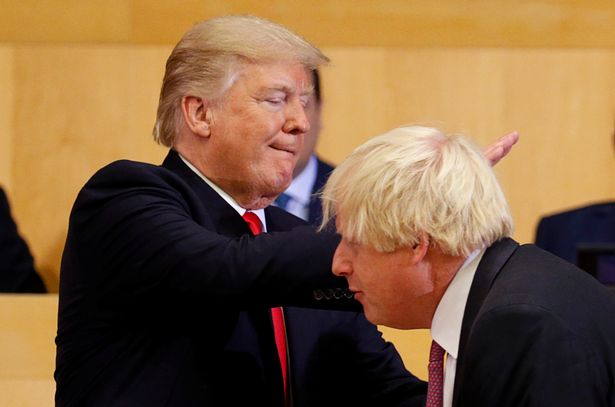 Boris Johnson literally gets a pat on the back from Donald Trump. Photo: Reuters/The Mirror

There was a moment in last night’s ITV debate between Jeremy Hunt and Boris Johnson where the yellow-haired muppet told us exactly what kind of prime minister he will be. Poundshop Donald Trump refused to back Britain’s embattled ambassador to the United States, Sir Kim Darroch, by saying he would “not be so presumptuous” on when Darroch—scheduled to retire in six or so months—would leave his job and that “I alone will decide who takes important and politically sensitive jobs” – a terrifying thought in the best of times.

These are not the best of times, though. They are quite possibly the end times, with Boris’ all-but-inevitable move into Number 10 the opening of the seventh seal, behind the election of Donald Trump, Brexit, the fire at Notre Dame, California earthquakes, and, of course, Joe’s departure from Love Island. The world is already despairing. Yet somehow, the once and future clown of the Conservative Party has somehow made it all worse.

Sir Kim came under fire over the weekend when confidential diplomatic cables he sent back to London, in which he called Donald Trump “inept” and “insecure” and his administration “uniquely dysfunctional,” were leaked in that most reputable and esteemed of publications, the Mail on Sunday. Sir Kim managed to hang on throughout Monday and Tuesday, despite repeated personal attacks by Donald Trump. His position became untenable, at least in his eyes, though when his all-but-guaranteed future boss refused to publicly support him. Boris Johnson’s refusal to stand by Britain’s ambassador to the United States is said to be the driving force behind his decision to resign.

The relationship between Donald Trump and Boris Johnson has long been one of rabid speculation, with many feeling that the erstwhile mayor of London and the current charlatan-in-chief were too cozy. “Boris Johnson is a friend of mine,” Donald Trump said last year after Johnson resigned as foreign secretary. “He has been very, very nice to me, very supportive.” To Trump, being nice to him, being very supportive of him, is what counts. Not right or wrong, or good or bad, or smart or stupid. All that matters is that you kiss the ring.

Boris Johnson knows this, and so last night he gave Trump something he desperately wanted and rid him of that troublesome ambassador. By refusing to support Sir Kim, Johnson basically handed him a P45. Donald Trump could be laughing all the way from the White House toilet.

That Johnson would throw a career diplomat and one of the most senior members of the British Civil Service under the bus to appease the tangerine tyrant is enough to disqualify him from ever even stepping foot on Downing Street. But what’s truly terrifying is what it means further down the road. Last night, Boris Johnson demonstrated two deeply concerning qualities that make the notion of his premiership utterly terrifying.

To begin with is the obvious: when it comes to defending British values and people—whether they’re senior civil servants or run-of-the-mill citizens, as Nazanin Zaghari-Ratcliffe would tell you if she wasn’t starving in an Iranian prison—Johnson will always choose self-interest. As of last night, part of that self-interest is in sucking up to the nectarine Neanderthal currently pretending to govern America.

That is deeply concerning for civil servants and the diplomatic corp. Nothing Sir Kim said was wrong, or malicious, or a lie. It was the stone-cold truth. If our diplomats cannot relay their frank and honest assessments without fear of reprisal, then the Foreign Office cannot function as it should. They perform a vital service, and part of their ability to perform that service is the knowledge that there will be no reprisals for their honesty. This is true not just of diplomats but across the civil service. When the women and men trusted with giving expert advice to the government of the day no longer feel confident doing so, something has gone very awry.

Beyond this, though, is the fact that Boris refused to defend his countryman. If Boris Johnson can’t, or won’t, stand up to Trump in defence of his ambassador’s frank assessment of the situation in Washington, it is unfathomable that he will stand up to Trump on foreign affairs or trade.

Trump is a man who has publicly said that he wants the NHS on the table during any US-UK trade negotiations. We already know that Trump wants to push up drug prices in the UK. Trump wants US companies to have more access to the NHS than they already do, which many fear would accelerate a privistation crisis which has been ongoing under the Tory-led government of the last 9 years.

Given what we’ve seen so far, there is no indication that Boris wouldn’t gladly carve up the NHS on a sacrificial alter of Trumpism just to secure a trade deal for his wealthy friends. His first policy announced during this leadership race was a tax cut for the most wealthy, which tells you where his priorities lie. It is entirely likely that Prime Minister Boris, eager to strike a trade deal with the United States after leading a no-deal Brexit, would do whatever it took to get Trump to the signing table.

Once there, I cringe to think what Boris will do to appease his new boss. What we know he won’t do is stand up for Britain’s best interests. He showed us that last night, and because of it, a career civil servant and one of Britain’s most prominent diplomats was forced to resign. Who will Boris throw under the bus next? Probably all of us.

Well, all of you. I live in America. I’ve had two and a half years to get used to being governed by a bumbling blonde baboon. You become somewhat numb to it after a while, probably because you start drinking all the time. Stock up on wine before you can’t get it through the Port of Dover.

The thing is, though, the British people will have it worse than the American people. Donald Trump is clearly the one calling the shots (though I still think he takes orders from Vladimir Putin – every boss has a boss, they say). Boris Johnson has made clear he’ll do as he’s told. You, in return, get Brexit and higher prescription drug costs. And Donald Trump gets a stooge in Number 10.