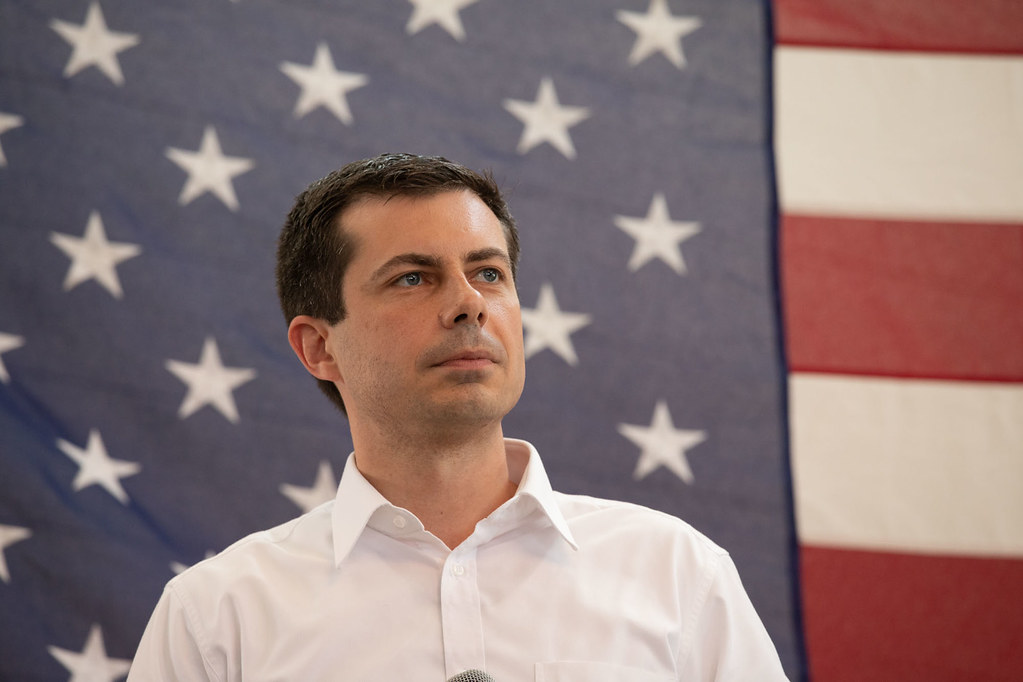 Mayor Pete Buttigieg at an event in Iowa City, Iowa on July 14, 2019 (Photo: Flickr/Pete For America)

Way back in 2017, I wrote an article for the Independent in which I lamented that neither Jehmu Greene nor Pete Buttigieg was elected Chair of the Democratic National Committee. “I just hope that we’ve not seen the last of Buttigieg or Greene, and that maybe party elders will start allowing them to lead us into the future,” I wrote at the time.

Well, the time has come for one of them. Pete Buttigieg has surprised almost everybody—but not me—by seemingly rising from obscurity to the top-tier of Democratic candidates for president. To anyone who familiar with Buttigieg before he sought the party’s nomination, though, there is nothing surprising about this. We’ve long known Pete Buttigieg was a rising star.

I have been continually impressed with him since he declared his candidacy in April. It was a brazen move for the Mayor of South Bend, Indiana—population 101,000—who had lost the only statewide race he ever ran. Many were, and are, sceptical that someone so inexperienced could or should be president.

I made similar arguments against then-Senator Barack Obama as a Hillary Clinton supporter and doorstepper in 2008. Over his eight years in office, Obama—who when elected was only four years removed from the Illinois legislature—proved that experience holding high public office is not a requirement for being an effective, even excellent, president. In 2016, the election of Donald Trump solidified the fact that Americans are willing to vote for someone with little or no political experience.

Of course, Trump also shows that a lack of experience is not itself a qualification. What Buttigieg lacks in elected experience—and what Trump lacks entirely—he makes up for in knowhow. As mayor of South Bend, Buttigieg cut unemployment by 6.6% (the second highest of any city studied in a recent report by Business Insider), an impressive figure given the economic stagnation occurring in much of the Rust Belt. Under his mayoralty, a Studebaker plant which had been decaying for half a century was turned into a state-of-the-art call centre. He thought about closing the city’s utility pay centres until he realised how many unbanked people relied on them—showing an ability to change course when presented with compelling new information and also an understanding of the real economic struggles of working-class Americans.

None of this is to say that Pete Buttigieg is a perfect candidate. There are plenty of areas where we disagree. “Medicare for all (who want it)” sounds good, but I worry about the political will—both in the short- and long-term—to adequately fund a federal programme that competes directly with private insurers, an issue you don’t have with simply “Medicare for all.” Still, I recognise that many Americans are deeply distrustful of “Medicare for all,” and getting such a policy through even a Congress completely controlled by the Democrats would be nearly impossible, as Obama discovered in 2010.

Similarly, I disagree with Mayor Pete on his plan to cap free college tuition for households who make $100,000 a year or more, thinking that like public schools, libraries, and fire departments, every American—regardless of income—ought to be entitled to a college education should they desire it. Most Americans aren’t as left-wing as me though, and I am nothing if not a pragmatist. I worry that a failure to meet American voters where they are could risk a backlash similar to that experienced by Jeremy Corbyn in the recent British election.

And then there is the issue of race. Mayor Pete’s lack of any real support among Black voters is concerning. There are real questions about his record on gentrification and policing in South Bend, ones he has yet to adequately answer. Goldie Taylor laid these issues bare in an essay for the Daily Beast, one well worth reading.

Still, getting out of my big blue bubble in Chicago and moving to North Carolina in 2018, and then Tennessee last month, I’ve realised that many of the people who voted for Trump aren’t foaming-at-the-mouth racists (though they definitely didn’t let Trump’s foaming-at-the-mouth racism stop them). They’re hardworking people hungry for a change. We need with speak to them, not over them and not down to them, and to let them speak to us if we have any chance of winning the crucial swing states we need to win—and more importantly, effecting real change that can help workaday Americans live easier, better, and happier lives.

South Bend’s remarkable comeback has been because Mayor Pete has a vision for his city and country not rooted in the past, like Donald Trump’s “Make American Great Again.” He understands that the challenges facing American in the 21st century will not be met with 20th century solutions. “We propelled our city’s comeback by taking our eyes off the rearview mirror,” he said in a video upon launching his campaign, “being honest about change, and insisting on a better future.”

This honesty about change, and what is required to move forward, is the cornerstone of why I support Mayor Pete for President. “We’re not going to be able to replace this president if we think he’s just a blip, just an aberration. It’s going to take more than that,” he said in September. It’s a stark, and blunt, statement of reality that Donald Trump is a symptom, not a cause, of a deep malaise within the American public (particularly the American white public).

This means healing the divisions in the country without sacrificing core progressive principles like racial equality, women’s rights, and an immigration system that welcomes rather than demonises those looking to make America their home. Overall, Mayor Pete gets this, and he’s shown he’s able to win and govern with these principles. He seeks to unite Americans of all stripes rather than continue the bitter divides which have stymied any consensus-building or change over the past several years.

Despite some stumbles and some unanswered questions, Mayor Pete joins together a progressive agenda with a pragmatic roll-up-your-sleeves, can-do attitude vital to tackling the major issues of our time. Pete Buttigieg has demonstrated a vision and ability to move America forward while bringing a bitterly divided nation together. It is why I will vote for him for President of the United States.

Skylar Baker-Jordan is a freelance writer based in Tennessee. His work has appeared at the Independent, Huff Post UK, Salon, and elsewhere. Follow him on Twitter @skylarjordan and become a sustainer at www.patreon.com/skylarjordan

5 thoughts on “Why I’m voting for Mayor Pete”